To encourage co-creation and offer an easy way to give feedback on different development plans, the City of Tallinn developed a mobile app for urban planning.  The AvaLinn app - AvaLinn meaning open city - was launched in January 2018 and it was piloted for the planning of the Skoone Bastion area in several idea-gatherings.

Key objectives were to develop an easy method for feedback on different development plans from the citizens and to give an opportunity for the locals to co-create the urban space together with the municipality via the AvaLinn app.

The app has been used since the launch to conduct idea gatherings on development plans all over Tallinn.

What makes the service user-centric?
This mobile app is an innovative tool to engage more citizens to city development plans. What makes it user-centric, firstly it was co-created with several stakeholders taking into account user needs. Furthermore, presenting city's development plans digitally in mobile app makes city's plans more accessible to everybody. The app can be used in three languages: Estonian, English and Russian.
What impact has the service had?
There have been seven idea-gatherings since the launch. Users can walk around the area using the app to look at the structural plan, read informative signs, and like or dislike suggestions in the plan. They can also leave comments that are visible to all, and which other users can like or dislike. This interactive tool for collecting feedback about projects involving changes in the cityscape has helped citizens understand new developments and also give their opinions, thus creating better planning solutions for everybody.
How was the service co-created?
In order to develop the mobile app, workshops for stakeholders were arranged back in 2016 in order to get more detailed input on how the mobile app should work and how to attract the users for the app. The app made it possible for the local stakeholders to express their ideas and give feedback regarding the plans made by the municipality.
Video 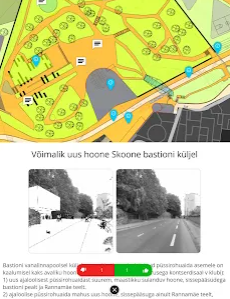 How user-centric is this service?